In this update Tulsi plant information you should to know ablout it. Tulsi, also called Holy Basil, is one of the most sacred plants in India and is considered “The Queen of the Herbs” for its restorative and spiritual properties. Also spelled Tulasi or Thulasi, it has been used for thousands of years to support a healthy response to stress, natural detoxification, and restore balance and harmony. Our infusions are not only delicious and organic, but they are also nature’s perfect rejuvenation.

Each variety has a slightly different look, taste, and smell and when combined, create a perfectly balanced herbal infusion with an array of health benefits and Tulsi plant information.

A History of “The Queen of Herbs”

For more than 5,000 years, Tulsi (Holy Basil) has been revered as one of the most sacred herbs in India. infused with restorative power. Hindus view her as a goddess (a manifestation of Lakshmi) in the form of a plant bestowed with great spiritual powers.  According to legend, no amount of gold could outweigh Krishna’s power, but a single Tulsi leaf placed on the pan in loving devotion tilted that scale.

In India today, it is still traditionally grown in an earthenware pot in every family home or garden and the leaves are used to make a delicious and refreshing tea.

In Tulsi plant informational Tulsi traveled west along the early trade routes from the Orient to Europe. it became known to the Christians as “sacred” or “holy” basil as is reflected in its Latin botanical name, Ocimum sanctum. They hailed Holy Basil as “The King of Herbs” instead of as a queen, and Holy Basil became routinely included in legends, offerings, and worship rituals and was looked on by many as a gift of Christ. 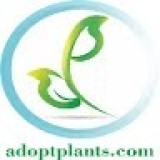 We are a group of enthusiast which helps you to create a green oasis in your home or office. Our Mission is to grow GREEN together & forever. Adopt Plants does not believe in only selling plants. We believe that every time you buy a plant. you take home a life and this new life needs to be raised for it to thrive. Our plants come in attractive pots and planters adding to the overall appeal of the plants and ensuring that you would love to add a piece in your decor. Be it ceramic pots, Customised & handcrafted planters or Handmade tray Gardens we bring to you something new every season. More of that we provide an extensive range of Indoor / Outdoor plants, Planters, Gardening Accessories, Organic Products, Unique, and Exclusive Products, Go Green Marketing ideas, Corporate gifting, Landscaping, and Horticulture services. For more info visit our Service Guide link.